People On The Grid with Josh Weitzer

Big thanks to Barcelona BBQ and Josh Weitzer for the opportunity to film this. Learn all about Josh and his passion for cooking, what he’s doing and his take on the culinary sector in Barcelona. Josh shared with us his style of cooking is a fusion of Asian cuisine with barbeque a strange but delicious combination.

Brian: Welcome, this is the second edition of Barcelona BBQ podcast and video interviews. I’m Brian Heinen of Barcelona BBQ and of course I’m joked with Katrina Logie from People On The Grid. Our guest today from On Fire Kitchen, is Josh Weitzer. Welcome Josh!

Josh: It’s good to be here!

Brian: Thank you for joining us. We’ve been talking about Barbecue for a long time. I’ve known Josh now for, 10 years I think I’ve known you and more close friends that last six or seven years.

Katrina: and how long have you been in Barcelona, Josh?

Josh: Actually at the end of this month, it will be 15 years. That I’ve been living here.

Katrina: How did you start in the kitchen in terms of when you were a child?

Josh: Yeah, my parents always loved cooking a lot of international cuisine. Definielty as a result I love food from around  world. Because I got to try so many of those flavours. I started experimenting, trying to copy those flavours because I loved them so much. When I would go to Japanese restaurants I really loved Udon. I had to have that similar flavour. My parents would also buy food at the asian market, so I I would look for all of those things to be able to copy that amazing flavour.

Brian: You’re from the United States.

Brian: Exactly, it’s got quite a good name for itself.

Josh: Yeah, No, With good reason. Chef’s from around the United States are feeling that vibe. They’re coming to Oregon for many different reasons, partly because of the culinary culture that they’ve developed there. But also, the really high quality ingredients that you have, and the really great wine’s that they’re producing not only in Oregon but also in Washington.

Brian: And from what I understand, in Oregon and as well as up in Washington and Seattle area there are quite diverse restaurants, there is a lot of selection if you will. Would that be fair to say or no?

Brian: So how did that change, or did it, when you came to Barcelona?

Josh: No, I think that ya, you’ve seen a proliferation of restaurants that offer an international cuisine here in a different way than it was presented earlier. Now you have this food restaurants, specialized asian food restaurants. And when you also see a big influx of Chinese immigrants here, you see a lot more of real, local and regional Chinese food restaurants popping up here. You can go and sample some of that from places, not only here in Barcelona but if you go out to Santa Coloma for example, there is a whole Chinese community  out there and I’ve been going out there for a couple of years now.

Brian:  So the Chinese has been a big influence on you overall.

Josh: Pan asian. My parents loved Chinese food. We went to a lot of Chinese restaurants and I loved that. Thai food loved that so much.

Brian: And you’ve taken to the barbecue and grill seen as well.

Brian: I think that’s how we came so close too, around the barbecue was your pan asian.

Josh: That is kind of my specialty. Barbecue.

Katrina: Josh what about your cooking classes, I mean you bring Asian, combined with local foods. Spanish with Asian.

Brian: How does an American guy teach Asian food.

Josh: I think you have to follow your passion. And that’s what I’ve done. I mean that’s why I’m cooking today. I was teaching here for a long time. Teaching English and I got into cooking, teaching cooking through teaching English. But, I’m really  focused on making that complete transition to teaching cooking now. I love to mix local ingredients, local products, with some of these ideas. And I think that’s what happening here as well. You can see not only with asian food, but also with Peruvian food, mixes that Asian food in here. Catalan and Spanish food is really the next step of that as well. It has maybe just arrived here a little later, than maybe it has to some other countries.  But definitely, I think that you can see that.

Katrina: You tend to explore, rather than following a recipe book, you create your own.

Josh: I read recipe books, and I love to watch recipes on Youtube all the time. And that’s part of the place that I get the inspiration from what I do. But a lot of the things I do are based on just an idea. You’re somewhere and you taste something and it brings all these ideas into your head and you say wow this is something I really love. What can I do with this flavour. How can I make this flavour my own. And that’s what I try to do.

Katrina: And that’s what you’ve done with the pork today. You’ve added something.

Josh: It has my personal touch to a basic recipe. My addition here to try not only to use those asian flavours but find something that melds well with them, like the orange, or the cooking wine. Adding the orange juice mixes well with those flavours and gives me one layer of preparation that I was looking for.

Brian: It’s the worst thing to do, but can we take a peek?

Katrina: How did you end up, a) starting your kitchen, b) coming up with the name “On Fire”?

Brian: Were you cooking somewhere else before? Or have you always been cooking for yourself?

Josh: I’d been teaching cooking here for the last 5 years almost, if you include my time with Whats Cooking BCN, which is my first project which is teaching English and cooking together.  After that I started working with a cooking school here, teaching tourists in their kitchen, teaching them Spanish food, Tapas, Pealla.

Brian:  I have a tough question for you. When we do our Barcelona BBQ festival. What are you going to do, play music on our stage or participate in the barbecue?

Josh: You know, you put me in a tough spot. It’s music.

Brian: BOTH MAN. You do both. 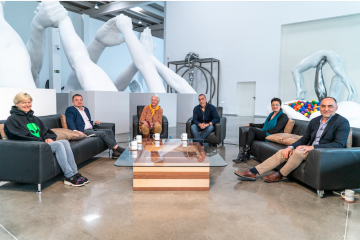